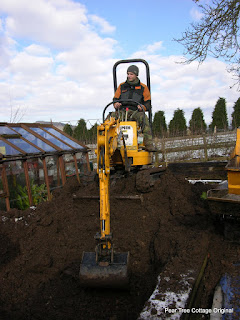 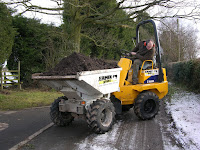 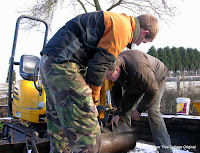 Not exactly the very best weekend weather for major earthworks!  However, decisions had been  made  so it was make or break.  As suspected, clay was found beneath the topsoil and instead of well drained and fertile raised bed; we had a clay lined bath.  In a way, these findings were pleasing as it meant that we had made the
right decision.  Without removing this clay; we could never grow vegetables reliably or successfully.  By day two, all soil had been removed to a depth of 2' and a huge sump created in the centre and filled with rubble into which any water will drain in the future.  Even more pleasing was the fact that the sump was dug right through the seam of clay.  Of course there was mud EVERYWHERE!  As the snow and frost thawed, so the soil became stickier and sticker clinging to anything and everything - especially gravel! Thank goodness we had amazingly brilliant, enthusiastic and expert help with Chris (seen on dumper & power barrow) and Ian (on the micro-digger) 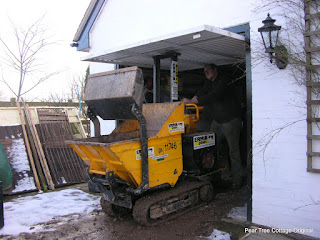 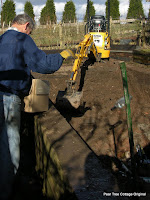 Despite careful measuring, the clearance between the top of the power barrow and the cart shed door was 1/4 of an inch!  Almost too close for comfort!  Al, however, really enjoyed having a hand in drainage improvement! 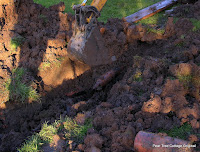 As if that wasn't enough - it was on to the blocked septic tank overflow before the digger goes home.  Now we have an open trench from the top to the bottom of our little orchard but at least the trouble spot was identified enabling remedial work to begin.