With Wichenford Open Gardens Weekend at the end of June 2009; we chose May 2009 to commence a giant water feature project!  To dig up the overgrown rockery, dig out a deep culvert and use the rockery rocks to line it and then pump water round allowing it to fall into the rock culvert via a piece or rusty down pipe and then drain out and underground and back into the pond.  It really was a massive undertaking.  We had to lift the turf, remove all the rocks, dig the culvert.......but......whilst we had a digger......why not put in steps?.....and then..why not level a base and have a summerhouse for Al???  The project became bigger and bigger as time became less and less.  We rescued all the newts we found beneath the rocks and carefully found new safe homes for them.

We chose the hottest days of 2009 to heave the enormously heavy rocks into place. This was followed by an epic journey to Barnsley for walling stone – details of which don’t bear either recollection or repetition!  Suffice to say it was our longest day.  I have never built a dry stone wall but I had a huge amount of theory!  How to tie in the stone.  How to incline the wall back to withstand the weight and pressure of the soil. How hard could it be?  Like all skills; it was far more difficult than I bargained for!  Some stones have since been dislodged by burrowing creatures!

Every possible hindrance and hiccup fell our way.  We found pipes lying beneath the steps restricting their numbers, and dimensions.  We had to build up ground in order to make a sufficiently large base to accommodate the summerhouse and we were bitten to death by clouds of horse flies. Al even resorted to a blow torch to limit their plague proportions.  Once finished, it's all very worthwhile and the long hours of hard work forgotten - nearly!  We're looking forward to more sundowners in Al's summerhouse listening to the cascading water.


It wouldn't have seemed complete without some lighting and so Dave (with help from Geoff and Roy and Joe) of DSM Electrical Installations of Worcester was commissioned to display yet more of his VERY artistic lighting skills by illuminating everything - the steps, the pond and the culvert!  His garden lighting has been a huge success.  The fish are attracted to the underwater lights which means that we can watch their activities. It's very romantic on warm summer nights.  We even managed to lay the last piece of turf the day before the open gardens weekend and vowed NEVER to start such an enormous project and then extend it before such an impossibly tight deadline!

Last summer (2010) my lovingly built (but rushed) stone wall started to fall down.  I figure it's one of those many skills that always looks easy when being done by the skilled person!  Rather than spend hours/days having another go, we enlisted Chris Genever.  In a day and a half he took the whole thing to pieces and rebuilt it.  What great improvement?  He used a brick hammer to re-shape individual pieces of stone - something I had never thought of doing.  So much for just theory!  We also levelled and painted the summerhouse.  Well done Chris!  Let's hope the chickens don't dig up the lavenders! 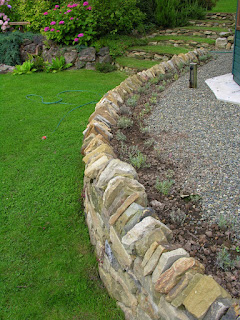 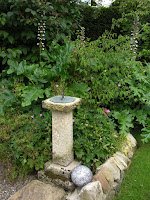 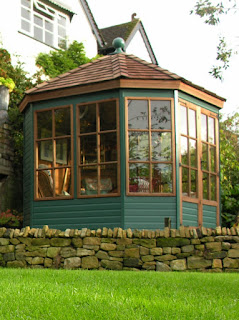