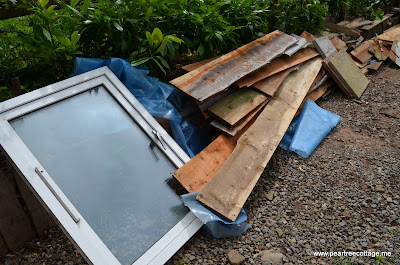 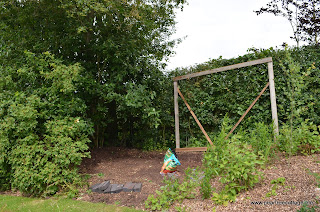 A RUNNER UP IN TV CHANNEL 4'S

From an unpromising start and after hearing of an unwanted shed that was on the brink of being burnt; we decided to give it a go and rebuild an unwanted 10' X 10' shed.  It arrived on the drive in (very heavy) pieces - courtesy of Chris Pugh.  It had a modern white UVPC window and a rather nasty looking plastic cat flap and was miles bigger than we could accommodate.  We soon realised that an expert builder was going to be needed for this project and that is where Chris Genever stepped in.  As was pointed out numerous times; it would have been easier to buy a shed of the right proportions BUT, it wouldn't have been half as much fun.  In fact, it wouldn't have been any fun at all!  The trouble with making a large shed smaller was that all the supporting timbers were in the wrong places. 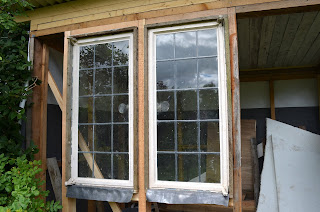 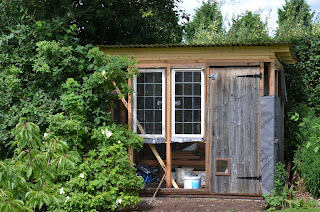 Having decided on its resting place, we began by building the floor and shortening every floorboard.  Then everything else kind of evolved.  We ditched the plastic window for leaded panes bought on EBay and we ditched the cat flap for a pair of pears.  Everything else was re-used and in the case of ceiling boards made smaller as we had done with the floor boards.


All the leftovers from ceiling and roof boards were cut and painted and they form the frieze which hides the harsh edges of its tin roof.  We found some leftover lead for the windows and we also insulated it and covered the insulation with large sheets of ply.  We did have to buy insulation and ply plus a few other bits and pieces but, the vast majority was built recycling and even upcycling what we had.  The inside was then painted (with leftover paint) and the window frames stained.  I painted an inherited seat (from Kay) and placed on the slate threshold (also reclaimed from Kay's garden) and then furnished it with some inherited furniture - again from our dear old friend.  The bookcase has enabled me to store my extensive collection of RHS journals completely out of the way and the little writing desk is a lovely place to write - if one had the time!

Of course, this description hardly explains all the Saturdays this work involved or all the things I got wrong like mixing up all the frieze pieces so that none of them matched up (and the stick I got for such a BIG mistake!) or the fun I had rolling up all the tails of lead to look like little moustaches!  It is also home to an exercise bike which, is en route to the the chickens.  The thinking being that one will be shamed into using the bike on a daily basis! Either way, the upshot is a little hideaway with a good reason to pop inside.  Now all I need is some more time!! 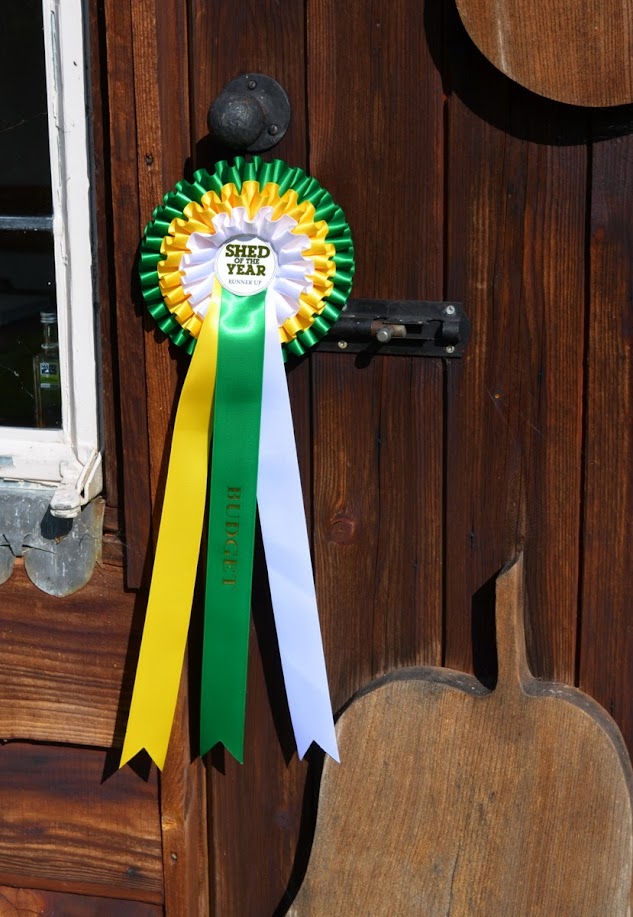 In early 2017, I had a call from a TV researcher enquiring about The Pear Hut.  I had entered it in this nationwide competition a whole FOUR years earlier.  This action had been LONG since forgotten but, one thing led to another and the rest is now history!

See how it all happened here!