VERY exciting news!!  Chris has an agreement to rent 25 acres of local woodland much to everyone’s delight!!  Due to a heavy prevalence of grey squirrels, it contains very many dead trees so he will be kept very busy! 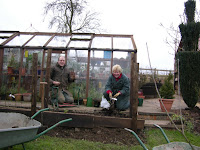 Before work can begin on the removal and replacement of several tons of soil from the Veg Patch next week, there is a HUGE amount to do.  As it was such a cold day and safe in the knowledge that she wouldn’t be seen by anyone in the garden, Head Gardener dressed herself in a pair of rather fetching green overalls over a warm fleece and boots!  Due to a local power cut, she was caught out by at least 3 neighbours! Why hasn’t anyone designed sensible gardening clothes that look vaguely attractive for us girls ?  There’s SUCH a gap in the market!
No time to dwell on vanity – too much to do moving purple sprouting plants!  Never been done at this stage of growth or season but as they are so healthy and vigorous it had to be worth a try. Besides it’s a favourite vegetable! Given what’s about to happen in their patch; there’s nothing to lose!  There were also new raspberry canes to be planted (2 varieties: Autumn Bliss and Glen Lyon) and old ones to be removed – whilst so doing; another idea was hatched!  To terrace and level the raspberry bed with more sleepers.  That in turn, gave rise to yet another idea: to terrace and level the entire top orchard border with even more sleepers!  As if there isn’t enough happening!  As it is, Chris is already hoping to have enough time to re-dig the septic tank overflow from the comfort of the micro-digger cab (before it’s returned to the nice man at Ermine Plant Hire!) next weekend!  He also had the brilliant idea of putting Kay’s arch down in Cato’s corner to await its cloak of logs – watch this space! Other jobs this week included moving an Acer, cutting down the ornamental grasses, trimming the laurel, re-erecting the rose support (now mended and strengthened by JW Lanes), planting what Chris hopes, is a Himalayan Musk – better not say where as it might be considered ‘Guerrilla Gardening!’  Moving a Euonymus from the path of next week’s digger, re-planting young laurels between the verge and in front of the fence oh, and logging the wood on the drive under the light of the lamp post as power now back on! It’s almost impossible to list all jobs as, in between those, the roses were top dressed with homemade compost and more was dug in beneath the new raspberries.


In case anyone is wondering – Al was busy organising the rubble in readiness for new drainage in the Veg Patch, attempting to fix the leak on the pond filter for the umpteenth time (fingers crossed tightly as he managed to practically empty the pond last week – we could even count the fish!) and burning the ornamental grasses without singing the Hawthorn or the conifers this time!  He also prepared the usual Saturday gourmet lunch and organised supper  – no need to be good at everything!