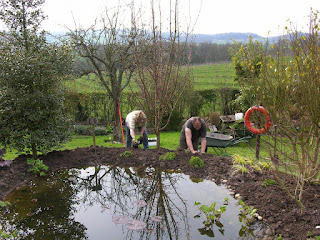 Putting in a pond with a natural look on a slope has proved difficult!  After all, not too many ponds occur naturally on sloping ground! All the Rud have survived the winter and are now very active as are the newts.  The water lilies have also thrived.  Amazing! We HATE those dreaded plastic plant baskets so much, we tied the lilies to bricks and just lobbed them in!  That was 3 years ago and every one has really thrived!  Absolutely NOTHING is planted into plastic (baskets or pots) anywhere in the pond.  Maybe we should start a campaign: "Who needs plastic in a pond?"
On Saturday, work continued around the pond margins.  We have been removing the turf and replacing it with planting - most of the plants have been moved in from other areas of the garden, namely: Lysimachias, Gunneras, Astilbes and Lobelias.  Others like Ligularias, have been acquired elsewhere. Hopefully the pond margins will take on a more lush and natural appearance when the plants become established, which, hopefully won't be too long - rabbits allowing!
This winter the rabbits have eaten 2 mature conifers to their deaths and have been chewing at an Exochordia and a Holly.  All were/are mature shrubs and I desperately hope these last 2 survive.  It has served to spur us on to finish rabbit proofing on the lane side of the garden! 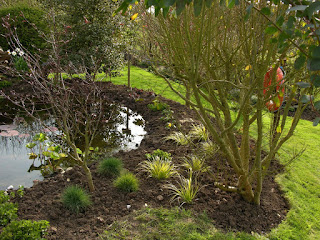 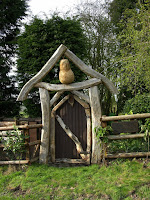 All the turf removed  has been re-laid on the verge outside the threshold to the Pear Gate.
Whilst all this was happening; the Under Gardener has been  busy repairing 6 old solar powered garden lanterns - 5 successfully so far!