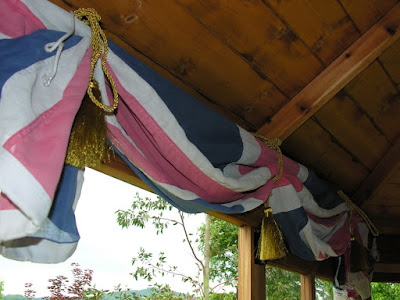 New idea for Al's summerhouse  - an Austrian blind made from the old Union Jack. Now he can enjoy a sundowner and see what he's drinking!  Bonus! As the summerhouse faces due west, sundowners can be really dazzling!


For anyone interested in making a blind, the fabric was stapled to a batten already cut to length.  The batten  was first rotated (to disguise screws) and screwed to the ribs on the roof which allows the ties (redundant curtain ties in this case) to pass either side and right around both batten and fabric. Pre-drilling assisted screw insertion. Hey presto: a flag swag!

Hi, can i know more detial of how this blind is install please?
thank you so muchh