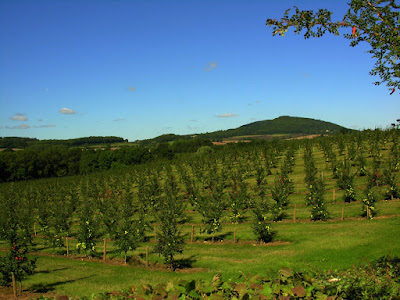 Posts on the garden blog have been a bit thin on the ground of late - due to the lack of a kitchen!  The harvest has continued around us and most of the apples in the photo have now been harvested. Good enough reason to keep drinking Bulmer's best! (which we did at Saturday's ploughing match.) Despite having to scrape off acres of wallpaper and paint ceilings of even greater acreages, garden work has continued. Hedges have has their last trim of the season and the orchard border has been cleared of its last remaining relics - ie. several misshapen, ageing and woody shrubs.  It means more light for the hedge to thrive and room to plant something showier and  more vigorous - when Bransford Nurseries have their next sale!


The Cornus Contraversa variegata (alias The Wedding Cake tree) has been moved to centre stage.  Yes, the middle of the lower lawn.  Such a special specimen tree deserves  such a spot - we hope.  It put on more growth than expected and it's a good time to move it now.  Hopefully it will continue to thrive - in which case it will need plenty of room to display its tiers.  Digging out a large circle of grass followed by a deep hole in such a prominent area of lawn made us feel we should have had a silver spade and that there should have been speeches and applause - even a band.  The reality was 4 hens all heads down looking for worms!
(NB I saw one at Whitlenge Gardens 4' high for £59.99 - ours, now 2' tall, cost £12.00 when it was merely 1' high in April. What price time?)