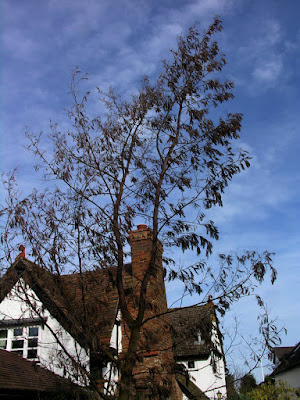 We thought long and hard but, after close examination,both Acacias were pronounced dead along with a Eucalyptus, a Ceanothus.  Cause of death: winter temperatures of -15.  No use dwelling on matters - even tho it was 20' tall and flowered for the very first time last spring AND I'd grown it from seed brought back from Oz 6 years ago.  Dead is dead! so, down it came and the sky looks a little emptier on the top lawn!  Despite ferocious squalls which sent us running for shelter, other jobs included emptying the compost heap (well nearly a third of it!)and spreading it on the lower (and already weeded) border, pruning the Moyessii and doing the bottom hedge.  All this meant a massive and very thorny clear up at the end of the day. Al was in charge of the bonfire as we were supplying the fuel.  Chris had the idea of putting the FMJ rose support (which, for may years supported a Lady Hillingdon) in place of the relic of a Pyracantha, moving the yellow shrub rose from the Studio Border and moving the Banana Bench behind the Berberis.  He came within a whisker of severing an electric cable when plating the shrub rose!  Another 'Chris Idea' is to lay a brick foundation for the bench which has views over the hedge and across to Woodbury - mmm, nice!  The ideas then just kept coming - as always!  Possibly a stepping stone footpath leading from the lower lawn to the bench.............anyway, darkness fell so those ideas will have to wait for another day!