Well........................!!  We gave it a fair innings and we raked up after the girls faithfully for 8 whole months but we now concede defeat!  Four chickens excavating flat out 8+ hours each and every day - even in 3/4 acre is more than we can keep up with - particularly at this time of year when new shoots are just beginning to emerge.  The damage is too much.  We are extremely lucky to have such a brilliant neighbour and from next week, the girls will be turned out to graze on, what has become known as, the Gaza Strip. 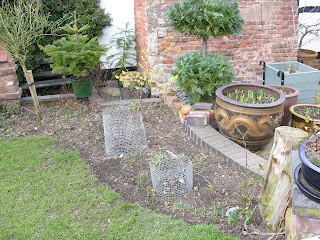 They will have the area between the the two sections of rabbit wire at the very bottom of the garden.  It's the most perfect solution as they will keep it weed free and still retain their freedom without causing any vandalism in the garden. Phew!   Wave of relief!  I feel as if I shall have my garden back!  No need to fence of the vegetable patch and put in gates and barriers everywhere!  I could NOT be more pleased - especially as I so want them to be free. It will also mean that won't have to worry about  the threat of nettles, goose grass, scutch or docks (or their seeds) invading from this area.  My precious David Austin roses are unlikely to be dug up again either!

Above left: Hen defences for the re-planted roses!
If anyone ever asks me for advice on keeping 4 totally free range hens in a garden; I would say: If you value your garden and it's 3/4 acre or less, then don't!  It's not as if I hadn't been brought up with poultry because I had and, many more!  They just weren't allowed in the garden!  Now, I know why!  In fairness to ourselves, the girls arrived in June when all plants were tall and strong.  They weren't presenting themselves as tasty young shoots.  Furthermore, the girls were very young - just point of lay.  Now we have a very different situation.  The girls are now big and strong and young and tender plants are at their most vulnerable to non-stop beaks and claws!