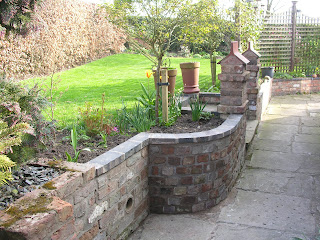 While fox defences were being built, the other Chris (Genever) and builder extraordinaire was also hard at work demolishing and rebuilding an unsafe retaining wall with no help from anyone.  And! Talking of curves - how well did he do??  It looks so much nicer than it did before and the addition of the clay drain pipe adds to its character as well as being so practical.  All ready for the Aubretia and pinks to trail over!
As if that wasn't clever enough, he also straightened the lamp post which did have quite a list.  This meant digging out and relaying all the granite sets around its base.  Another beautifully neat job.