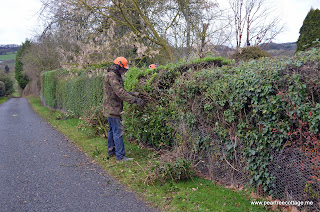 As if there wasn't enough going on with interior painting and decorating running alongside fairly major garden projects; a decision was made to replace the front hedge - which as you can see was mainly ivy and brambles with little left in the way of actual hedging.  We decided to go for Laurel as it's evergreen and grows a little quicker than Yew.  It meant moving the rabbit wire and erecting posts and rails first but over the weekend, a good start was made. 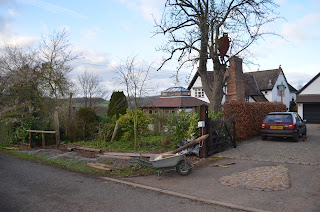 There were some miscalculations and, as a result, we ran out of both rails and Laurels!  This weekend should see the job finished and afterwards the - now much bigger border needs a major overhaul!  We have shrub roses heeled in the veg plot and some sale bargains in the form of 3 Hydrangeas plus a Pink Hawthorn and a Skimmia all in need of homes!