Despite underestimating the numbers of skips required and their sizes (ahem!) Chris continues to make huge leaps forward with the (sunken!) herb garden.  He doesn't seem to mind all these progress photos but doesn't much like posing himself!  There has been much grumbling about the lack of plans but the fact is: we like his ideas far more!  The idea is to make it secluded but sunny.  Chris realised from the outset that there would be a requirement for drainage and has laid pipes beneath as well as conduit for electricity enabling me to have a water feature/light or some sort of ornamental feature in the centre.  I had this idea that maybe it would be possible to drill through the very biggest piece of rock we quarried and have water bubbling up through its top.  Chris doesn't seem to think that drilling a massive piece of rock would in the least difficult!  However, he was quite strict about the base of the rock needing to be small enough for the water to trickle into the sump beneath in order for it to circulate.  Mmmm.  I hadn't thought of that one! 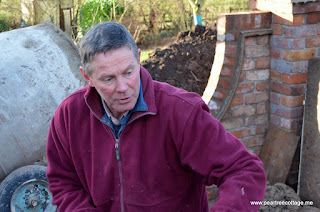 We're very pleased with the stone and brick combination - an idea I spotted in Jersey. The plan (or lack of!) is to have trellis at the back and natural timber planks above the wall on the right.  It turns out that the Prunus is exactly central to the little Draycott gate. The jury is still out on what style to have in the curves.  Maybe estate fencing to match the gate or even thin chestnut posts.  Anyway; tomorrow a bulk bag of pebbles is expected, a delivery from Lanes and yet another skip - let's hope they don't all arrive together!