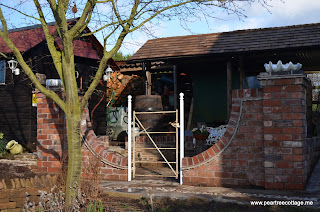 A milder afternoon meant that the new Herb Garden could be cleaned out, the borders filled with soil and - yes!  Planted! We now have (Scilly) mint, Oreganos, Parsley, Fennels, Lavenders, Sages, Rosemary, Marjorams - nearly of which I had already.  As the water feature remains unfinished, a bowl of Primulas temporarily adorn the top!  Still to do - paint the stone star burst with brick acid to remove mortar (which will define it much more) replace the oak strips in Chris's absolutely splendid cast iron seat and erect fencing on top of the wall and metal trellis by the verandah.  Hopefully this will give it a more enclosed feel.  Undecided - what to do in the 2 quadrants either side of the Draycott gate and also on top of the brick piers which, for now, have Androlia shells.  I dare say something will spring to mind.  All sensible suggestions welcome!  When the herbs put on some growth; hopefully, they will tumble over the border edges and soften the whole appearance.

It will be useful having the old oak barrel (top right) so handy for watering.  It will be linked to the down pipe allowing it to collect rain water from the Cedar tiles on the verandah roof. Any excess will drain into the land drains Chris built beneath the stone paving. 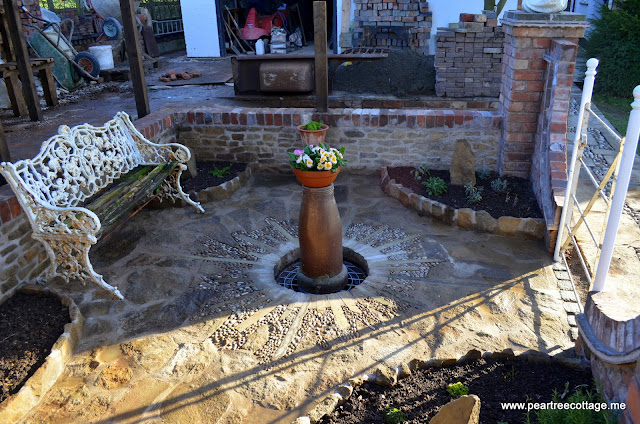