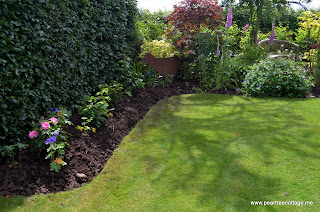 A visit to David Austin meant that one had an opportunity to replace the Ferdinand Pichard which the chickens dug up and killed.  Luckily for me, one's husband was so impressed with all the roses (and the crab salad lunch) he suggested we bought more!  We came home with a Rhapsody in Blue, a Jude the Obscure and a Gertrude Jekyll.  This meant that an entirely new border was called for!  Having tackled a major weeding exercise in the top lawn border and filled at least 6 wheelbarrows, at 5:30pm, we then set about removing turf and digging a new border under the beech hedge.  The soil is heavy clay in this area and it was enriched with chicken pellets, organic farmyard manure and bone meal.  The roses have been under-planted with lots of hardy geraniums which I grew myself - I think they're Johnson's Blue.  The location of this border means that it can be extended if and when more roses are purchased.  We could in fact take it right to the lamp post end of the hedge.  Hopefully the roses - which are all repeat flowering shrubs will stand out against their green back drop and thrive in their new homes!