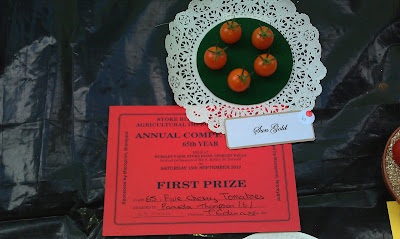 Despite the usual busy garden day, we found time to take over a few exhibits to compete at this year's Stoke Bliss Agricultural Improvement Society Annual Show & Ploughing Match - by getting up at 6:30am (YAWN!) Anyway, it was well worth it as, weatherwise, it was the most perfect day and, as well as vintage tractors, there were a couple of pairs of horses ploughing.  The corn stubble was shining beneath blue skies in the autumn sunshine and who forgot their camera?  Thank goodness for a mobile phone.

We had a few successes at the show this year too!  The cherry tomatoes won first prize!! That in itself was a first!!  This years results were: 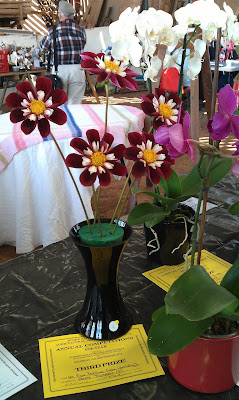 This has been very worst year for our veg patch as, being a raised bed with lovely free draining soil, meant that with the constant heavy rains of summer, all the nutrients leached out and were lost.  Consequently nothing thrived. Runner beans were sparse, leggy and poor.  Onions were just not worth planting and even my Chrysanths are leggy and poverty stricken.  The moral of this story is MANURE and plenty of it later this year!  Nevertheless, it was very pleasing to think that despite a higher standard and a poor season, such results were obtained!

I should say that the dahlias were a Genever/Thompson effort as after all, Chris gave us the tubers and also the tomato plants so I cannot claim all credit here!  Some credit should also go to our neighbouring apple expert: Rob Holloway for the winning apples!

We dragged both Chris's over for an excellent roast pork lunch only to hear complaints about no work being done!!  Anyway it was a great coincidence to meet the very builder who built our kitchen, bathroom and utility when Pear Tree Cottage was lived in by the former Chief Constable of Worcestershire County Police: Eric Abbott.  He even remembered capping our lovely chimney with a concrete slab to keep out the rain back in the 1960's.  We had to tell him that we had it removed for something a little more in keeping!  By the way, he was there as a ploughing competitor!!

We did manage to finish boarding the end of the shed and put in the insulation and ply lining on 3 inside walls.  Chris P. in the meantime, levelled all the soil from beneath the shed and, with his chainsaw, carved 2 beautiful seats out of the old Hawthorn stumps placing them both in the  little shady nook between the Laurel and the Berberis and planted them with Ferns and Symphytum.