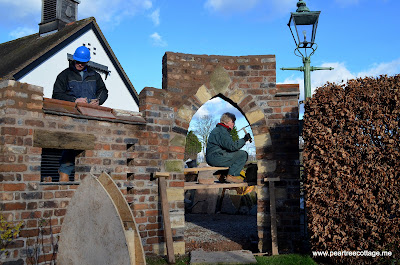 In absolutely F-R-E-E-Z-I-N-G  conditions, work on the wall continued.  As it was such a clear sunny day, the photo disguises the glacial temperature and the chilling winds!
Chris finished the brickwork and laid all the really pretty roll top ridge tiles giving the wall its own little roof which will serve to keep out the weather as well as adding the finishing touch.  He also (rather sneakily!) removed the wooden form revealing his arch in all its glory.  I was allowed to do a little pointing, brush down the nearly dry mortar and also chip out the squodgy bits of dry mortar ready for re-pointing.  My duties also including breaking the tiles in half ready for laying beneath the ridge tiles, passing up shovels full of mortar and stacking bricks ready for laying.  Well, I am only the apprentice after all!  With all the extra layers of clothing (7 in places!) including my rather fetching overalls, it was about all I was capable of doing.  We're now waiting for the arrival of Al's (other!) dragon which we hope will sit on the end pier.