After a 5am start to finish watering, dead heading, general garden tidying and most importantly the critical: cushion placement (on every seat and bench in the garden including the Yew sofa!) The helpers arrived before I had even changed out of garden scruffs!  Today's Tea Team consisted of Colin, Val, Lindy, Maureen, Lyn, Eve, Di, Dave and Paul.  Chris was our photographer and general eye in the garden whilst Dave was the shuttle bus operator.  Paul helped on the gate and Al was in charge of dinner preparations and garden tours.  Denise was OIC Garage Gallery.  We were SO lucky with the weather as it was fine and sunny with a cool breeze (which did get a bit too cool by evening!)  We had about 457 visitors over the 2 days and our takings were:


That is an increase of 25% from the last event in 2011. We won't know what the final total will be until Tuesday when Denise works out the 5% from garage sales. A big pat on the back and an enormous vote of thanks is needed for the entire team who baked wonderful cakes, served teas, washed up and left everything perfectly spick and span after 2 hectic days!  11 stayed for Al's BBQ supper and we moved the outside table into the conservatory as we would have just been too cold to dine al fresco.

Now here's a funny thing.  Usually, it's me working alone in the garden with just the birds for company and a Chris on a Saturday.  Suddenly when it's filled with throngs of enthusiastic strangers, I found that I didn't feel at all comfortable about walking around and so talked to most people on the gate.  Weird!

We had a coach party from Staffordshire and visitors from as far away as South Africa and Japan.  The Japanese lady was truly amazing as she was something of an international expert on old English roses and was naming individual varieties and even discussing their history.  Furthermore, she was travelling alone and even driving to Stratford afterwards!  I should have enjoyed talking to her for much longer.

The visitors were really friendly and enthusiastic. However, there's always one exception!  She was the lady who claimed not to have seen our large warning about the electric fence which surrounds the Hen Pen and who even queried the  need to leave it switched on during the day!  This is the actual laminated A4 sign which was pinned on the gate post less than inch away from the electrified wire!!! 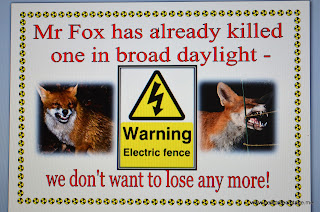 Her knowledge of vulpine habits was obviously a big fat ZERO and we all agreed that it was a shame Chris hadn't been on hand with the camera when she discovered the error of her ways!

However, he was on hand when needed later. Following an incident the previous day when 2 certain visitors were caught trying to blag their way in for £4 instead of £5. One in particular was so terribly convincing when claiming that the advertised admission price was actually £1 less.  We felt the score had been levelled!!

Following a degree of flack, Chris also managed to capture shots of actual visitors in the garden this time and more of his (excellent) photos can be seen at:

Thank you so much,
Now I have something to read during the holidays. This will take a while but well worth it like always
You can read another one here Besttoolsbrand