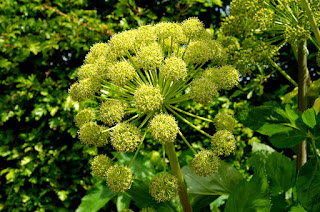 Just some shots of Angelica by the silver birch logs.  It's about at its best right now as it quite a striking and statuesque plant. I can't imagine how it got such a name.  A common name is Angels' Fishing Rods but it bears no resemblance.  The Royal Horticultural Society also tells us: 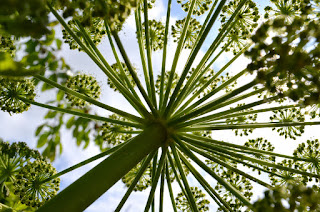 Angelica Archangelica are large biennials or herbaceous perennials, some monocarpic, with pinnately or palmately divided leaves and small white or purple flowers in large umbels.  A. archangelica is a robust upright perennial, sometimes monocarpic, with 2 – 3 pinnate leaves to 60cm in length, and rounded umbels of light yellow flowers in early summer.

This is from Wikipedia and even more interesting: 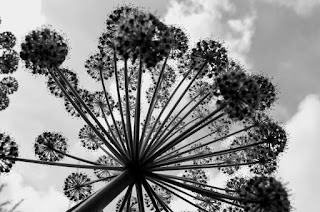 Natives of Lapland use the fleshy roots as food and the stalks as medicine. Crystallized strips of young angelica stems and midribs are green in colour and are sold as decorative and flavoursome cake decoration material, but may also be enjoyed on their own. The roots and seeds are sometimes used to flavour gin. Its presence accounts for the distinct flavour of many liqueurs, such as Chartreuse.
Among the Sami people of Lapland, the plant is used to make a traditional musical instrument the fadno. 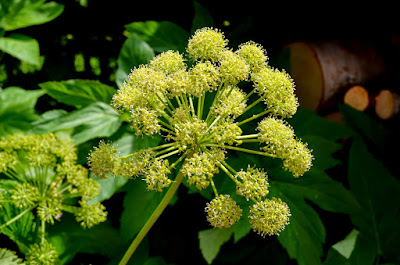