It was the last Saturday before our last open gardens and a major pond clearance was under way.  Chris was in waders in the deepest part of the pond surrounded by waterlilies when he managed to disturb a wasp's nest in the bank!  Suddenly he was under attack by swarms of furious wasps.  There was a humungus amount of splashing as he made his escape through the water lilies and back on to dry land but not before they stung his arm.  I was despatched to deal with the nest and managed to crawl under the Acer and dispense copious amounts of wasp killing powder in the nest entrance.  The nest was left overnight and today, work recommenced with not a wasp in sight!

The pond had a thorough tidy and top up and all lights checked. Dave of DSM Electrical Installations fame even turned out on a Bank Holiday weekend to fix the light in the culvert.  What a star!! So........we're nearly ready for tomorrow night.  I did say 'nearly' as we have to set up the conservatory and then hope for dry weather! 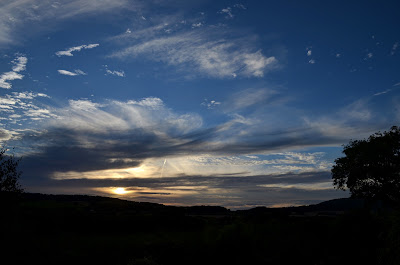 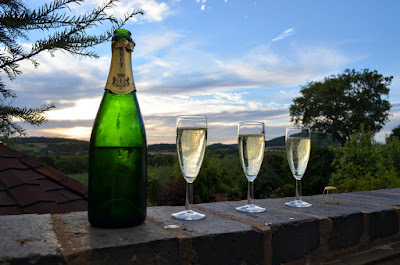 Having spent the day raking, mowing, tidying, weeding, trimming and strimming - yawn, we tested out - (purely for purposes of evaluation you understand!) a rather fine bottle of English champagne made just up the road and provided by Chris.  It was amazingly delicious and as it was made in such small quantities, it didn't even have a label.  Anyway it was quite the most perfect end to a busy and tiring day in the garden.  Even the sunset didn't let us down! 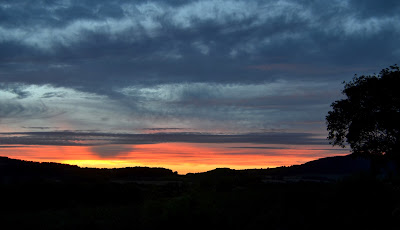 New gravel for the drive 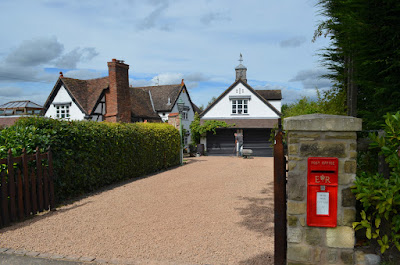 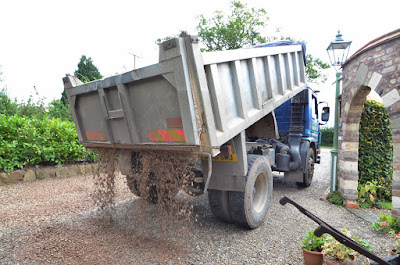 2 days to go before our open garden evening and 4 tons of gravel is dropped on the drive.  Thanks to expert tipping by Rob Thomas (one of Chris G's bonsai chums!), raking wasn't so very laborious although all 3 of us took turns.  I mostly raked round in circles!  Chris did the best job although I was OK in the small tricky areas by the wall!  It did look a whole lot better and, we have to hand it to he who decreed 4 tons was the amount needed!  ( I was tempted to ring and say it was not nearly enough!)  4 tons actually was the exact amount required for about a 1- 1 1/2 inch top up! Oh to have brains!!

The Demise of Henny Penny

It's with a heavy heart that I have to report the sad death of Henny Penny.  She was found unwell yesterday and had picked up a respiratory condition.  She died overnight and had even laid an egg prior to departing this world - gulp!  Surprising that such a healthy, weighty chicken could be overwhelmed so very quickly. Now our little flock is down to 4.  We won't replace her immediately as we know from experience that the remaining four would terrorize a new 'intruder'.  We'll wait until we can home a minimum of 2 and gradually introduce them as before.

In my view, Henny Penny was the most beautiful of the five and also the shyest and least arrogant.  We will miss her super dark brown eggs!
No comments:

"Chance to see award-winning Worcestershire garden in a different light."

Our last open garden evening for the National Garden Scheme is drawing ever nearer, our local paper has given the event a little publicity - see   Pear Tree Cottage Garden in the news!.  We also have Sarah Winton coming in the 'Daisy Bus.  She plans to drive around the area and help to advertise our event.  Sarah has spent the summer driving around the country and helping gardeners who open their gardens for the National Gardens Scheme.  What amazing thing to do!!!  We are very much looking forward to meeting her. 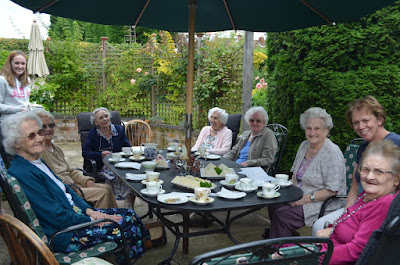 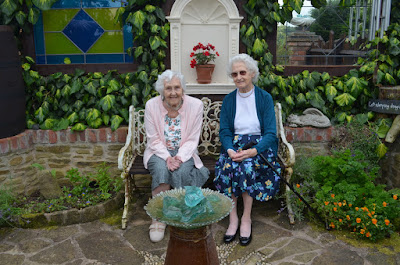 On Sunday we hosted a small tea party for Contact the Elderly.  This is an extremely worthwhile charity and although it's 50 years old, few people have ever heard of it.  It's aim is to give less mobile elderly people living alone a break from their solitary and lonely lives by bringing them out to the homes of hosts who are willing to give them afternoon tea.  Perfectly simple and easy to do. They were a perfectly delightful group of ladies and it was a pleasure to entertain them and their volunteer drivers.  Luckily it was warm enough for them to be served tea in the garden and even have a walk round.  One lady even remembered coming last year and spotted the fact that this year's figs aren't nearly as ripe yet.  More hosts and drivers are being sought in and around the Worcester area. 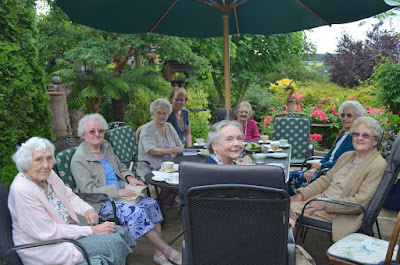 Working with Wood - dead and alive. 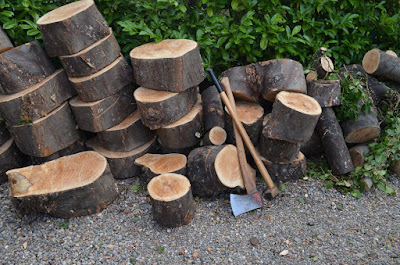 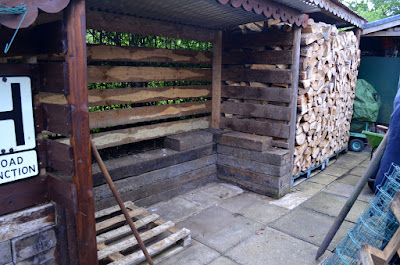 This Saturday it was logs, logs and MORE logs.  Moving dried logs from the log seasoner, sweeping it all out and re-stacking these dried and seasoned logs in the log store was our first move. Then came the sawing, splitting, loading, lugging and stacking the 2 tons of Sycamore tree that Chris and Kyle dropped off on Thursday!  We finished the lot and there was still enough time to finish pollarding the ornamental cherry which we started last Saturday.  It looks a tad bare for now but the Herb Garden now has lots of much needed light and the cherry  will be kept in check.  After all this - did we feel smug or what? 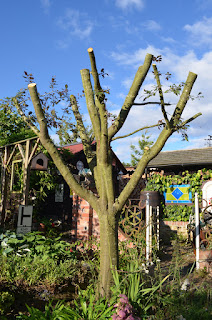 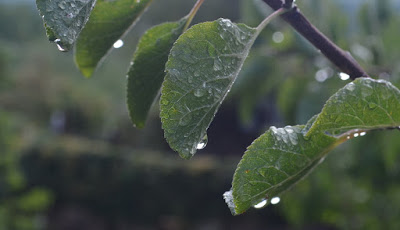 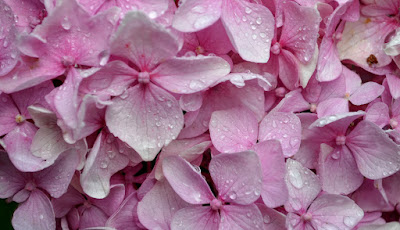 Thank goodness for some rain!!  We haven't had the really heavy downpours like other areas but at long last, we have steady rain for 24 hours.  The rain chain loved it but the painters doing the outside window frames weren't quite so enthusiastic!  The garden was really desperate and many Hydrangeas were wilting and looking very sorry indeed. Hopefully this will perk them up. Camellias and Witch Hazels also hate drying out and this garden is just too big to water everywhere. 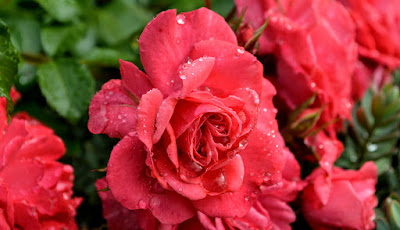 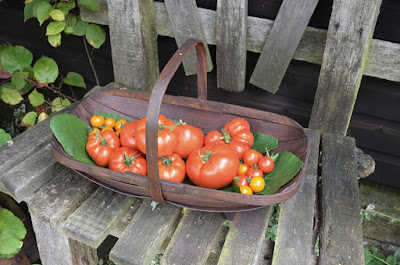 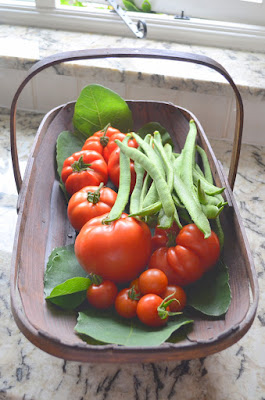 At long last the tomatoes are ripening and the runner beans are setting. We've had a generally very dry, cool and dull summer but recently have enjoyed the odd sunny and hot day which has made all the difference to ripening fruit. These tomatoes were all germinated from seed by Chris Genever and include Sungold, Gardener's Delight, Black Krim and Country Taste Beefsteak.  The Sungold are unbelievably sweet but all are delicious and will be put to good culinary use! I was late sowing runner beans and having done so, the weather was cold so ours are really very late and this was our very first picking.  With heavy downpours predicted tonight and tomorrow, we might strike lucky and have some MUCH needed rain - fingers crossed!

Making use of Windfall Apples 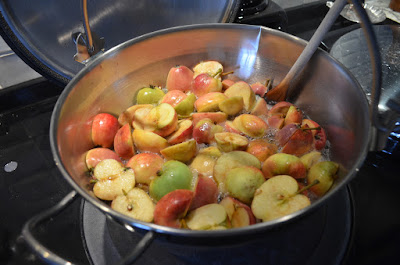 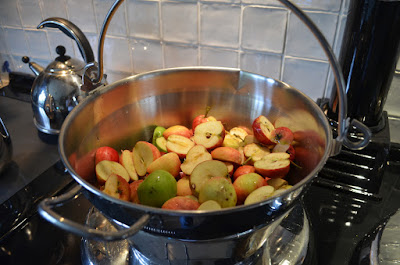 I never did get around to thinning quite a heavy crop of apples and as a result, we've had quite a lot of windfalls.   These are Bramleys and Katies. Rather than give them all to the chickens - even though they really love them, I made a batch of mint jelly today.  Having cooked the apples, I made an improvised strainer from an upturned stool and a suspended colander lined with muslin with a bowl in the base to catch the juice (much to the intrigue of our friend Brian who's painting the windows!).  Using desert and cooking apples meant that some cooked much quicker than others but it was none the worse for that.  I added lemon juice to take away some of the sweetness and added the chopped mint at setting point.  I recycled some washed jam jars and warmed them in the bottom oven. When all is cooled, I'll do some labels but I reckon these should see us through the winter.  Talking of winter: Chris and Kyle have filled half the drive with sycamore logs for winter burning.  That means logging and lugging on Saturday!! 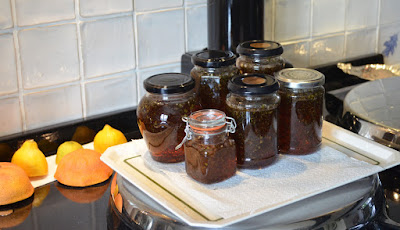 PS The chickens enjoyed the apple pulp after the juice had been extracted and I dry citrus peel to make firelighters for lighting those winter fires.  The oils in them burn well and smell fab!
No comments:

A single post can hardly do justice to all the pruning that's been going on at PTC so heres' a snatch of video and more photographic evidence. Luckily for us; Chris took most of the brash away as it would have taken forever to lug it all down to our bonfire area cut it all down and burn it all in an old oil drum - not to mention clearing up the mess left from dragging the brash from one end of the garden to the other.
No comments:

Yet again, Chief Blogger has been too busy to write posts but at least we're keeping up with seasonal gardening jobs. It's summer pruning time and not just the Yew. The Bay tree and ornamental cherry have had major haircuts. Well - the Bay had a hair cut!  The ornamental Prunus had rather more!  It had become so big it was obscuring too much light from the Herb Garden and, if there's one thing that herbs need it's light - preferably some sunshine.  The fact that we did the easier and lighter pruning first - like the Wisteria and the Bay and left the removal of big boughs from a mature Prunus until late in the day meant that there was massive amounts of clearing up to do and we didn't finish until after 7:30pm .....yawn!  Still, we did the worst and will finish the shaping up next week.  As usual there's never anyone to photograph the photographer but she did a LOT of clearing up as well as manning ladder security whilst Chris leapt from rung to bough and back again wielding a pruning saw.  She also managed to catch falling branches thus saving breakages.

As much as I like Wisteria shading out the bright sunlight, the window frames are being painted on Monday so it was a case of having to prune our green curtains!  The dining room is certainly startlingly lighter inside now.  Chris decided to compress the miles of tangled Wisteria into the wheel barrow by sleeping on it!! 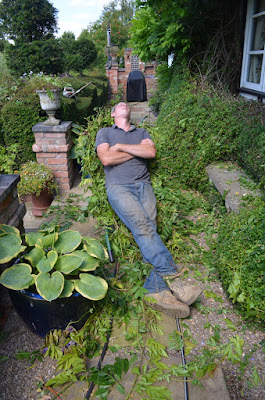