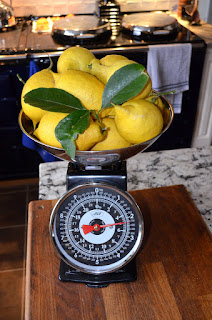 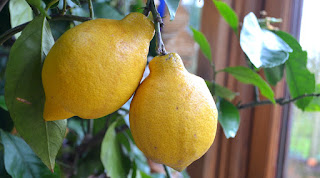 I wouldn't normally make marmalade BUT when the lemon tree in the conservatory produces such a heavy crop, it would be criminal not to do something with them. For reasons I won't go into here, the marmalade requirement is no sugar!  This means buying Xylitol at vast expense - on offer at £20.89 for 2 bags gulp!  It's made from Birch sap and I'm told by 'im wot knows that the body metabolises it differently. Luckily, it advises halving the quantity otherwise, I would have needed 4 bags!! 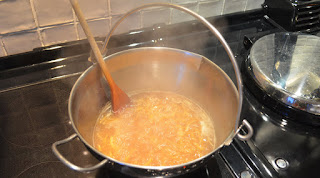 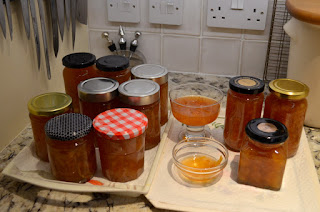 Anyway I picked and weighed all the fruit and then followed Mary Berry's recipe substituting sugar for Xylitol.  She cooks the fruit first and it does make extracting the pulp and chopping the peel super easy. I brought the whole fruits to the boil and then popped them in the bottom oven for a couple of hours. I had a bottle of Certo (pectin) in case it refused to set - which it did. Does anyone actually know why, if no sugar is used, marmalade despite lemons having naturally high levels of pectin, just doesn't want to set? Anyway, Certo saved the day and by day I should explain, it took all day!  Step by step photos

Ginger was added to a third of the marmalade so we have a grand total of 8 jars of lemon and 3 of lemon and ginger marmalade.  Must do some labels now.  Anyway, despite a sticky kitchen full of steam, 'Sir' won't be needing bought sugar free marmalade for while. Not bad for a little lemon tree which only cost £2.50 a few years ago. (I only wish it didn't attract Red Spider Mite and Scale.........sigh!)