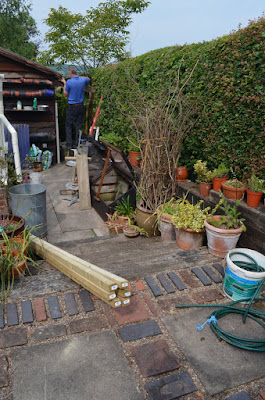 Having replaced an entire greenhouse due to head injuries caused by low door ways, it was unfortunate to find further injuries being caused by the canopy over the potting bench next to said greenhouse!! Chris to the rescue! The offending canopy was removed and decisions made to enclose the roofed area behind the garden tool shed and transform it into a miniscule potting shed. Yesterday, we replaced the clear corrugated roof panels which should stay free from algae as Chris kindly rushed off and returned with guttering which fitted exactly and will prevent rain water draining down th corrugations. He used fencing panels for the back wall and cut them down to fit. The plan is to cover them in ply and put a window one end and a door the other. Because it's so very VERY narrow, I'm undecided where to place the actual bench but, for now, it's been temporarily placed along the side. The trouble is, there's been talk of a triangular oriel window which is super appealing but impractical with a bench beneath it. Al's come up with an idea of going asymmetrically across the corner. Dare we tell Chris?