The Eagle has Landed...

This is the story of Chris's rescued totem pole.

Once upon a time there was a fallen oak tree which Chris decided to carve into a 20 foot traditional native totem pole. Over a period of 2 years and whenever he had any spare time, he worked away sculpting a thunderbird, an owl, a bear and a wolf to name but some of the animals.  Sadly, during a recent storm, a huge beech tree fell across the totem pole which was lying flat on a couple of trestles. The impact smashed through the totem pole and all his hard work.  Chris was able to rescue two of the animals - the thunderbird and an owl and (very luckily for us) brought them here where they were cleaned up with wire brushes and coated them with creosote. 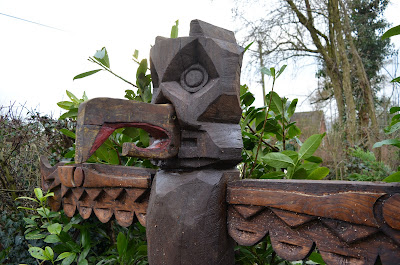 In the Pacific Northwest, traditional totem poles were carved out of pine - an altogether much easier, softer and lighter wood. These are solid English oak and weigh an absolute ton! Having attached the thunderbird's wings - I could just about lift a single wing, it needed manhandling down to the compost heap and then lifting up and over the bays and securing at the back. This proved a monumental task and not made any easier as the creosote didn't have any time to dry in the damp wintery weather. Even Chris was not daunted by such a prospect and ploughed on regardless.

Now we have the topmost section of his totem pole with its outstretched wings sitting above the compost bays like a guardian! In Algonquin and Haida mythology, the thunderbird controlled the upper world and could throw lightning by flapping its wings. It also controlled rain - hence its place at the top of totem poles. Totem poles were carved and erected to watch over tribes and families - which is fine by me!!