Making hay while the sun hardly shone at all!! 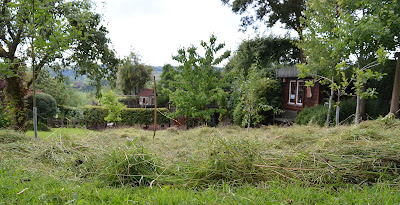 I think my favourite triumph was 2nd prize for meadow hay. Not only was I up against seasoned farmers with tons of the stuff but; it was Rob and Sally-Ann who gave up a few precious hours and helped to cut it. It was only turned 4 or 5 times as we had less than 48 hours of sunshine. Because rain was predicted, I bundled it all up, lugged it into the garage and spread it out on the floor and opened every door and window! It smelled glorious and, still does! before you ask, 'Who's going to eat it?' It will be used in the chickens' nest boxes inducing them to lay even more prize winning eggs!