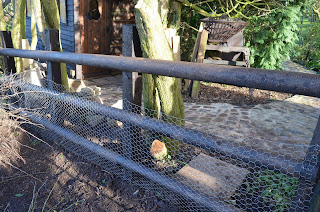 A slightly warmer but still damp and overcast Saturday saw Chris finishing the fence repairs with new rabbit wire which he's dug in. Initially, we planned to use the original wire netting - hence this being stapled to the outside!  It was on to the lower border to coppice the Hazel. We left 3 leaders meaning that there will be lots of home-produced pea sticks and sweet pea supports. Shrub roses were pruned, Lilac suckers removed and Sedums and Michaelmas daises deadheaded. In other words, a good old clear out and tidy up. We'll probably coppice again in 3 - 5 years time


Time to move along to Nutberry Noak - our little overspill fruit and veg patch which has lain fallow for a year whilst weapons of mass destruction were being released on a epic Bindweed epidemic! We have a cob nut, some currants and a gooseberry.  Sadly, Bindweed choked everything hence our eradication mission.

The beds were  dug over and what remained of the Bindweed carefully removed. Luckily, there wasn't too much. Old raspberry canes were removed and a mulch of home made compost dug in before new raspberry canes (Autumn Bliss) planted. Hopefully we'll be growing marrows and courgettes down here later in the year.

All in all, a pretty productive day!