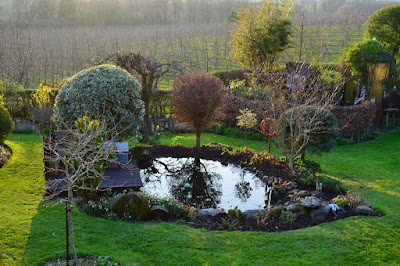 It's difficult to imagine that weeding around a little pond would take all afternoon!  Well actually more than that as it went on well into evening. two reasons, wet soil - especially around the margins and more importantly removal of as much Lysimachia as was possible. I have never pruned Dogwoods this late in the year as usually, they're all done in early March.
Anyway, 'tis all now done! Chris has placed a stepping stone at the entrance to the jetty and we have reshaped the grass border and its levels. Having replanted some pretty striking stripey irises near the Jetty, the plan is to allow the Symphitum to grow down towards the edge of the jetty. Where we had planted Lysimachia to hide the electric box, there is now a low growing conifer stolen from the bottom of the Sofa Border! Lysimachia was just far too invasive and it just flopped everywhere. After yet another day's rain; will I ever get around to edging the grass with long handled shears and the half moon edger???