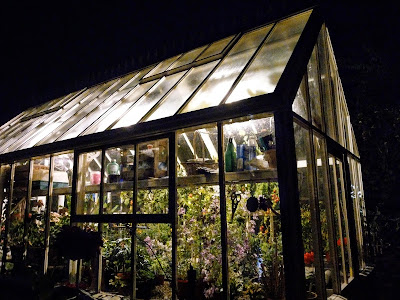 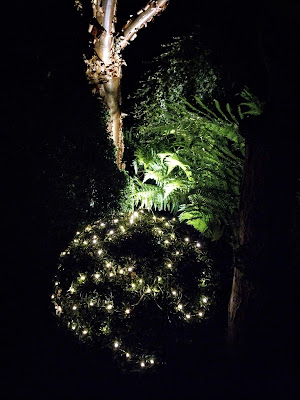 Following a frenzied few days of garden work, all is ready for tomorrow's Twilight Garden by Candlelight tomorrow event despite the appalling weather forecast!! Edging every border and lawn edge with a half moon edging tool and long handled edging shears proved quite a marathon! Chris came today and we put up extra lights around the conservatory even Colin the Caterpiller had a hair cut and a set of lights! The Bay tree has lights and Chris also sneaked a set beneath the verandah on the tool shed! Dave came yesterday and fixed lights, swapped bulbs and generally gave them a ll a bit of a MOT.
It poured with rain as we trimmed the Yew topiary - sigh! Bits of trimmed Yew stuck everywhere so clearing up was even more major than usual! Chris strimmed and trimmed and then whizzed round the outside hedges. I did all the verges and picked up the trimmings. We eventually came in at 8pm - yawn!  I don't think the weather will allow us to light many candles but the garden has never looked tidier and the lights look really pretty. More photos here: PTC Garden by Night