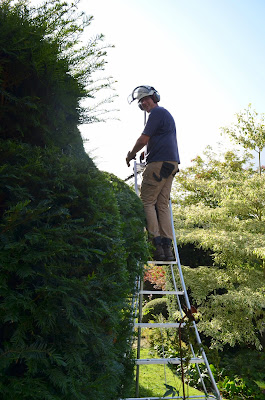 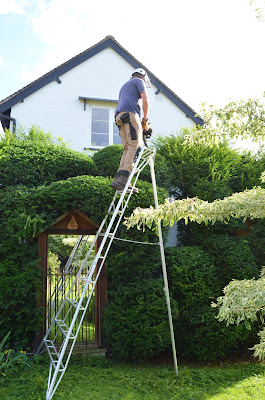 It's that time of year when the Yew hedging and topiary gets its annual haircut. This week, the big Yew hedge was top of the list. It's our tale on Powys Castle's famous Yew hedge!!  One sode of the hedge is all symmetry, precision and straight lines and the other side is all lumps and bumps and it meant to resemble a green waterfall.  Our Yew arch is so nearly formed and I reckon the 2 yews will have grown together by next year. Of course there was much clearing up but it's all neat and tidy once again.

Chris also cut the outside of the perimeter hedge and strimmed the ditch where there was MAJOR clearing up - so much indeed, the wheelbarrow was piled so high, the handles couldn't be found and Chris couldn't be seen pushing it! He couldn't see over the load and needed serious guidance!