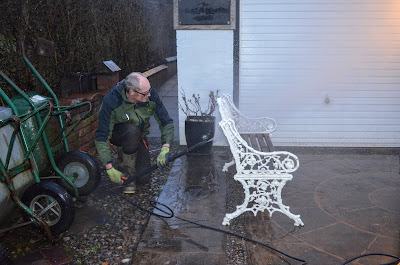 After a Saturday of frozen ground which allowed us to finish emptying the 2018 compost bay and finish mulching garden borders without leaving muddy ruts, it was back to more rain!!  We did however manage to plant our Yew avenue and also prune an Eleagnus.  The plan for the Yews is to prune them into 6 cones - 3 either side of the path.  Being evergreen they will add both structure and year round interest as well as some added formality to the Top Lawn Border.
However yesterday, it was sawing and splitting logs and a return to power washing slippery paths and stepping stones - thanks to Chris.  It rained all day and was far too wet for anything else.  Chris finished off by washing a couple of garden seats which are due for repainting tomorrow. 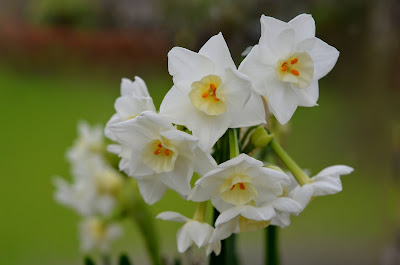 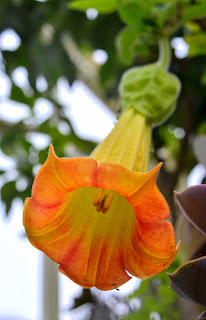 Meanwhile, I toiled in the potting shed dividing and propagating Streptocarpus plants and potting on some Pelargoniums.  The greenhouse plants are showing signs of appreciating the lengthening hours of daylight and are putting on growth.  A smaller Brugmansia propagated 18 months ago is flowering as are some forced Paper White Narcissus and of course a Jasminum Officinale  so the greenhouse is filled with perfume.  Janine's nectarine is just covered in flower buds, some of which are just showing some colour.