Range Cooking in the Herb Garden! 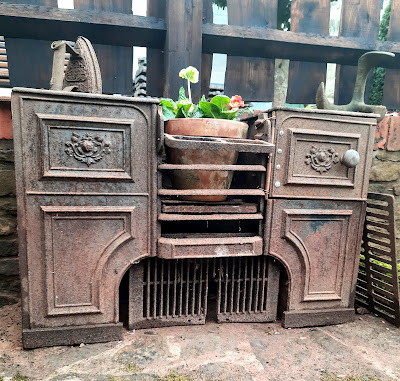 Whilst snowfalls, rain and floods have delayed many garden jobs, Chris Genever was able to install our latest feature in the Herb Garden!!  Yes!  A little cast iron cooking range!!  I absolutely love it and would have had it in the house if I could have found room for it!

I found some odd bricks (always so useful to have a few spare bricks kicking around!) which enabled Chris to build it in properly.  He even made some new hinges for the oven door using some sections of copper tube.  For now, I've put a pot of primulas in the the grate - yellows, reds and oranges to resemble flames - of course!  I'll have to revisit my planting theme for summer but, for now, we need some sunshine!

This new feature has stolen Easter Island Man's spot so he (and his hairstyle) need rehoming elsewhere in the garden............