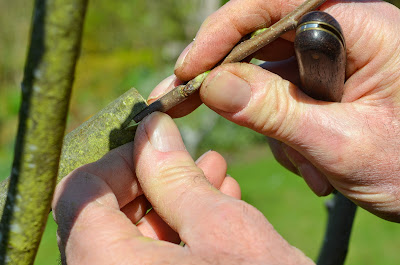 Today, we were very lucky indeed to have Rob Holloway come and graft 3 different apple varieties on to a Lord Hindlip desert apple.  The new grafts are Bramley, Falstaff and an unidentified desert - either a Herefordshire Russet or a Cox's Orange Pippin.  It was totally fascinating watching an expert make it look so effortless.  Rob is our neighbour and the manager for Bulmer's cider apple orchards some of which surround our garden.  In fact it was Rob who grafted the Falstaff on to the Bramley some years ago. As for the unidentified graft - Rob didn't hold out much hope as it was rather too advanced and its buds had begun to open.  He gave it a 30% chance.

If all goes well with the grafts, we shall remove the original Bramley which is really ill placed.  For this year, we have removed one of its larger boughs allowing us to harvest  fruit for which we hope will be its last year. 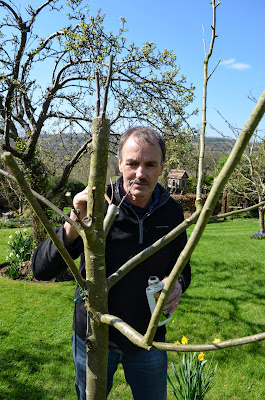 A BIG thank you to Rob!  I reckon it's a glass of cider we should be raising this evening not gin!!
BEFORE & AFTER APPLE GRAFTING PHOTOS.