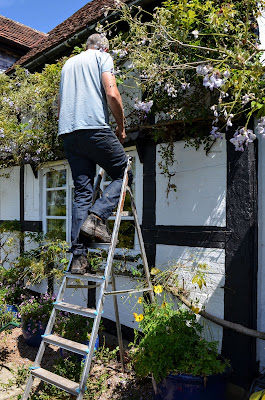 Never before have we seen more of Pear Tree Cottage!  Wisteria has ALWAYS been a garden favourite and this year we were an National Garden Scheme nominated Wisteria garden.  Time for our old Wisteria to rule again!  No more competing with a thuggish Jasminum nudiflorum and certainly not an old mildewed rose!  First it was removing the Jasmine - which took 2 Saturdays!  It was as high as the top of the window and obscured all of the Wisteria trunk.  The rose was a lovely old fashioned Albertine.  Sadly this old climber had no vigour whatsoever.  In a good year it would look fabulous for about a minute and a half.  For the rest of the year it was covered in mildew and its thorns tore the Wisteria.  Time to go!!  Now we have the whole of the house wall dedicated to the Wisteria and I must say, it looks SOO much better!  Simon has repainted the recently exposed areas and Chris, who a little sceptical at first, is fully on board with the new look! 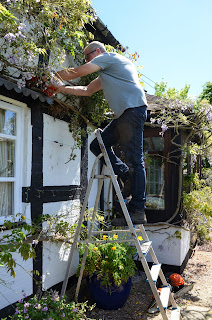 The blue pots have been spaced out and the little stone seat at the top of the Lion Steps re-centred. 'Wisteria Walk' (as it has to be known!) looks really quite spacious.  As well as making Wisteria pruning much easier, we love having the old gnarled and twisted trunk of the Wisteria on full view. 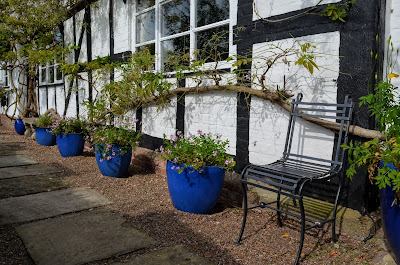