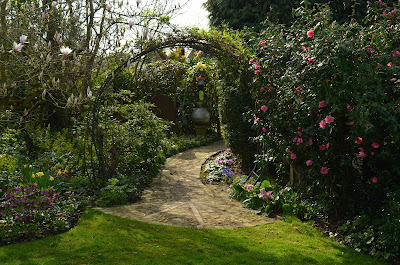 It's spring already and we've been so busy in the garden and making the most of some warm spring sunshine!  Hedges both sides of the drive have been trimmed.  The beech has been reduced in height abd the Laurel has had a mini pleach! Lawns are all cut and edges.  Pots are filling with colour and perfume as they are filled with Hyacinths and Primulas.  The Tulips are budding up nicely and, in the borders, the wallflowers won't be long before they're in flower.
Better late than never, I pruned the roses over our circular arch.  SUCH a difficult job as there is a climbing rose and a clematis either side!  Two are super thorny and two are supper brittle!!  Anyway, 'tis done at last!  On the move are the scented violas - from the owl planters to the raised border by the old cast iron roller. 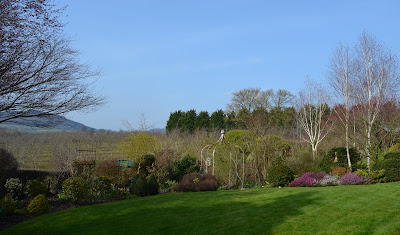 Meanwhile the flag stones have all been swept and tidied, the greenhouse floor has been cleaned and even Easter Island Man has had a haircut and blow dry!  Borders have been hoed and weeded.  Camelias and Magnolias are blooming and the Woodland Border which is always at its best in spring has really excelled itself this year.  Talking of borders: the Aspen Grove is also a picture!  It has really filled out and even thought the snowdrops are going over now, the Euphorbias and Primulas are following one!  Even though the Aspens were replaced with some Betula Jaquemontiis, the name remains!!