The arrival of Noah The Mower!

We have a new friend in Pear Tree Cottage Garden!  His name is Noah the Mower and although he can't talk back, he's fully trained and now voice controlled!  I've even linked him to my online calendar.  That way, he knows not to mow when we have garden visitors or garden events.  He also knows when it's too frosty for mowing!  He's been in residence for nearly a week and is still mapping the garden. 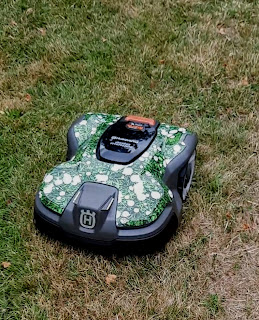 Whilst it's goodbye to stripes, I'll be able to allocate mowing time to other tasks and duties.  Also, I'll still be mowing around the edges and using the long handled edging shears.  Somehow, I think I'll still be using my usual mowers to pick up fallen leaves.  Noah the Mower has cables to guide him.  Alas, our overhanging trees meant that satellite guidance was not an option. With the present drought, there's never been less grass to mow.

We've experienced the most amazing service both from Craig at Husqvarna in Liverpool and O.H.M.S. in Pershore. Martin from O.H.M.S entrusted us with their demo model for a couple of weeks whilst they resourced the model we required. Things definitely didn't go at all well for them as one was stolen, one was lost in transit and another arrived damaged.  Despite all these hiccups, they ensured that we the customers were cared for. Simply outstanding service. I really could NOT recommend them enough!

Choosing his cover was tricky.  We could have had a sheep, a ladybird or even a zebra.  Trouble was, some of them looked a tad cartoonish hence our unusually tasteful choice of daisies! It's weird having movement in the garden he's still so unfamiliar and occasionally startling!

The next project is to build him a house!  Yes!  We still love our projects!