Back to gardening after the snow 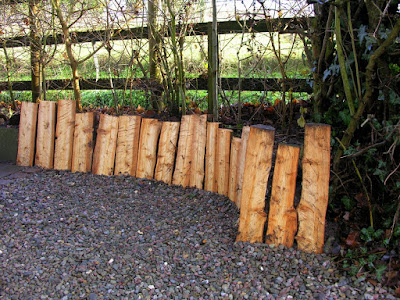 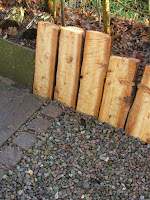 Despite it being Thursday, it was back to gardening after all the snow.  Chris finished digging in the rabbit wire and we finished off the end of path between the garage and the hedge where it joins the drive.  We split the remaining pieces of Western Red Cedar and cut them to size before digging them in and using them as a low retaining wall.
Because the concrete slabs on edge will be out of site (behind the garage), we've left them and gravelled up to the path using some precious granite sets to define the joining of 2 different hard landscaping materials. As we needed to make a curve, the narrow timber pieces made this easier to achieve.  I should have taken a 'before' photo!  The hens had scratched and mixed soil and bark chippings with gravel and there was nothing retaining the soil at the base of the hedge.  The wood won't last forever but looks suitably rustic in the meantime.  Chris also 'blew' round the rest of the garden which, for now; looks much tidier.