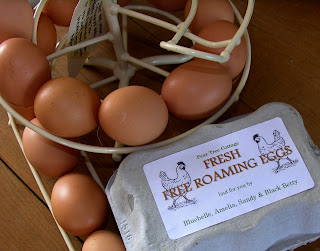 Total number of eggs given away or enjoyed by ourselves - erm..... about 569?  We found only one with a double yoke but I figure we're well in pocket despite the extra time spent raking and tidying up after them.  The cost of housing is not factored in as we figure that it was a capital expense and in any case we enjoyed building all the additions!  Other bonuses include far fewer slugs and snails eating the Hostas etc..  Major downside was the fact that they discovered the vegetable patch but it took them until September!  We plan to fence around it before spring - another cost but I daresay that we'll enjoy doing that too.  Can I argue that fact that they keep us fitter?  Also, they're always let out at 8:00am on the dot which means that Al brings up the morning coffee - MAJOR bonus!!! Who wants to be an egg millionaire anyway?