The new extension for the Hennery house has been finished. This means that all 5 girls will all have roosting room inside this winter.  Yes!  I know they have a perfectly serviceable pole house in the Hen Pen, BUT in a foot of snow, it's much cosier for them to have the shelter of the Hennery with warmer accommodation.  Al was delighted to find that Lulu was so taken with his handiwork, she immediately availed herself of the new facility by providing him with an egg!  Practically there and then.  Much smugness all round!
Having mowed the meadow grass several weeks ago, it crossed my mind that the girls might like to have a scratch around in amongst the hay seeds so I let them out.  BIG mistake!  They weren't the least interested in hay seeds or a lovely big expanse of mown orchard and instead made straight for the borders.  Wrecking, vandalising, looting and rioting!  Most of the mulch found its way back onto the grass and after vowing, never to let them out ever again, I was forced to have a major clear up with the rake.  It's truly amazing exactly how much mess 5 hens can make in a reasonably sized garden in no time at all!

While 'Sir' was engaged in construction, Chris and I pruned the Bay - well, truthfully, I held the ladder while Chris stood aloft wielding the pole cutter with his usual skill and accuracy!  We also put in Chris Genever's Aquilegia's and weeded the top lawn border.
The high winds have meant that apart from being without power for all of Tuesday afternoon, most of the fruit is now on the ground.  Luckily, Al had already harvested a fair amount and pressed into use a couple of old pine chests of drawers for storage.  This year, we'll use the garage and not the hut where, due to persistently vicious frosts, we lost much of our fruit store.
The small amount of rainfall has meant that the lawns are just beginning to green up again. The reseeded area around the base of the Ghost Pine is germinating and putting on a bit of growth. 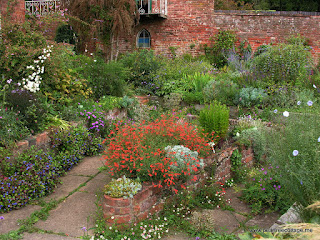 We visited Stone House Cottage Gardens
(see left) and their nursery yesterday - well it's good to have a day off from one's own garden and enjoy some on else's once in a while.  We came home with 3 new shrubs to fill gaps left by the hard winter.  The gardens were full of colour (obvious expert plant knowledge - sigh!) and wonderful quirky garden follies and features.  Amazing planting and beautiful borders with a massive variety of unusual plants, climbers and shrubs.  Despite the dull lighting conditions, photos had to be taken
https://picasaweb.google.com/100788191989823327785/ColourAtStoneHouseCottageGardenOnAVeryDullDay
We also loved the way all the plants for sale were labelled and described.  The nice lady was also so helpful and knowledgeable - a joy compared with the dreaded garden centres!  We'll definitley be back when they re-open next year.  I've just found their lovely website:  http://www.shcn.co.uk/   I can now quite see what attracted Tammy to write about this garden in the English Garden magazine!  In the meantime, hopefully our new purchases will flourish in the warm soil before the coming winter gets a grip.  Planting our new purchases is on the 'to do' list for the next Chris Day!