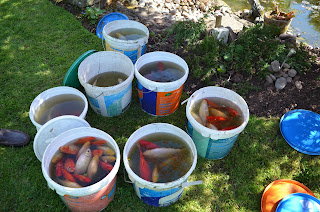 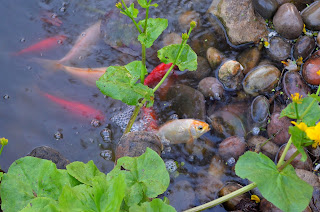 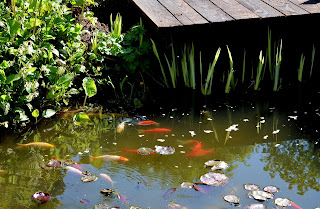 Following a few pond problems resulting in the acquisition of a new pond pump back in May, Head Gardener and Chief Blogger failed to mention a sudden increase in pond life! A friend of Chris Genever's was seeking a new home for his fish. No one had accurate figures when it came to numbers of fish and I was only too happy to help out. Up until then we had only native fish in our pond - a few Rudd and a single Golden Tench. It came as a bit of a surprise when 7 buckets full to their brims with fish arrived! They took 3 or 4 days to settle in as to begin with, they kept throwing themselves out on to the pebbles. The entire surface was boiling with orange and white fish! A week later and all was calm and they all settled down.

In the intervening period, we have lost a total of 4 with a further 5 going to live in a much bigger pond at Paul's. The water appeared much muddier for a couple of weeks. The culprits were a pair of wild duck and we have found ourselves having to clean out the filter far more frequently which is a complete pain of a job due to its location - but, for now at least, things seem to have settled down. Fingers crossed!! 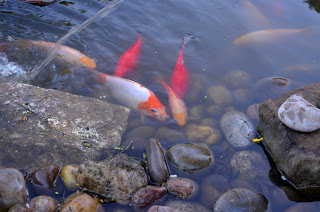