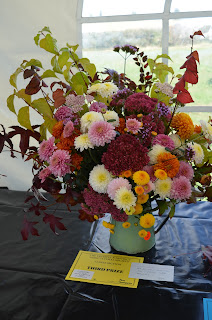 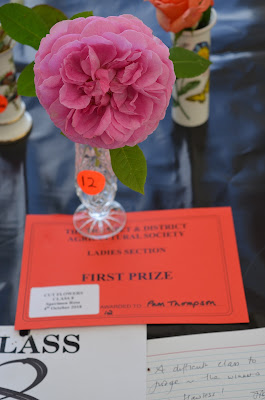 Following last Saturday's major tidy up prior to the arrival of foreign house guests, head gardener has been taking time off to show them around. We did make the Malvern Autumn Show - the like of which our friends had never seen before. The World Champion Vegetables were on display. For them - one word. BIG! 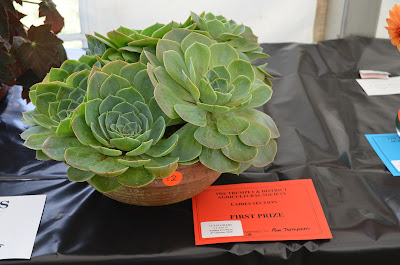 A last minute decision was made to have a go at at exhibiting a few bit and pieces in the ladies' section at Trumpet Ploughing Match. The afternoon before was spent scavenging in the garden for a few exhibits, printing some photos and what a surprise! We came home with 2 cups and quite a few prize cards! 9 to be exact with another accidentally left behind! We scooped the cut flower trophy and were joint winners for the photography cup. The pom pom dahlia tubers given by Chris Genever grew 3 blooms which won a 3rd!

Meanwhile: very sad news! My loyal and  trusty lawn mower died this afternoon! The deck rotted through and the front wheels just fell off whilst actually mowing! 13 years of loyal service and starting reliably - it's the end of an era and black arm bands for me!