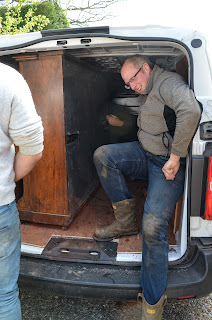 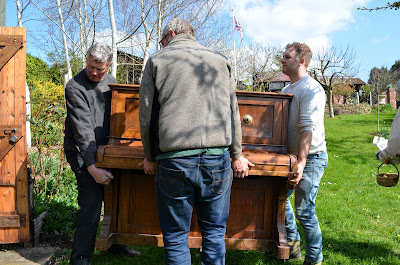 Back to the piano! OK a Steinway it isn't! A neighbour down the lane was giving away an old upright and even though I don't play, I've always lived in a house with a piano.  Anyway, thanks to more coincidences than I have time to mention here, it landed in the Pear Hut thanks to Ian (and his unexpected hired van) and both Chris's only one of whom was actually expected.  A tuner is booked for Thursday and in the meantime I removed all panels and as much mildew and dust as I possibly could.  Not a five minute job with a toothbrush between all the hammer levers!  Hopefully if the tuner can do anything at all, they'll be fewer complaints from one's son when he comes home and we'll have a playable piano in the garden. Watch this space!

One thing we never ever have in this garden is a dull moment!!  Soiree anyone??