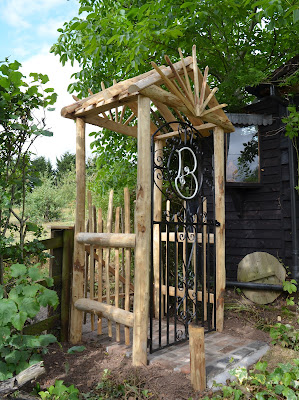 The original gate arch had rotted and was leaning badly under the weight of the gate in the middle.  The gate is pretty special as it was made by my father and was a birthday present way back in the 70's (ahem!) This garden is it's 4th home and  the 'B' in its centre will now stand for Bulmers as it faces their cider apple orchards.  Thanks to Simon it's already had a coat of paint and was waiting for some cleaved English sweet chestnut on order since April.  Having, at last taken delivery of the chestnut, all we needed was Master Craftsman, the one and only Chris Genever!! 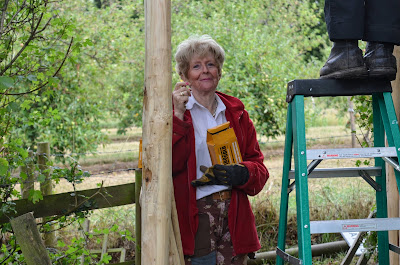 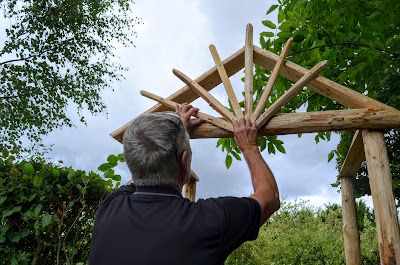 Chris managed to fit us in and creating the replacement rustic arch was huge fun!
As a mere apprentice, (very) amateur architect and chief designer, there were lots of complaints about the lack of plans and there were so many variables and constraints.  With the nearby oriel window on the potting shed, I didn't want masses of timber too close so I came uo with a rustic fence style design with vertical pailings at alterntive heights. This design was mimicked across the roof and in the second anti rabbit wicket - yes, we actually have 2 gates.  I also came up with a fan design in both gables. Again, we used pailings to ensure it wouldn't look too heavy.

Chris lifted the old bricks (which had to be 'stacked tidily') before carefully cleaning them all and relaying them on bedding and pointing them. after a degree of confusion (!) the were laid in a herringbone pattern.  Yes, I was a tad confused as the herringbones only show when viewed diagonally!!

Thanks to Chris's skills and patience the finished arch looks amazing and we're thrilled!

For  before and after photos, checkout: Gate Arch Construction 2022